Bukeni Waruzi Speaks at the United Nations on Gender-based Violence 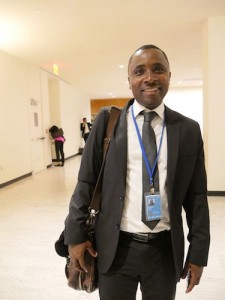 Bukeni was joined on the panel by Zaineb Hawa Bangura, UN Special Representative of the Secretary General on Sexual Violence in Conflict; James Duddridge, Minister for Conflict Issues for the UK’s Foreign and Commonwealth Office; and Kate Gilmore, the Deputy Director of the United Nations Population Fund (UNFPA).

WITNESS, along with the UNFPA were invited to present on what civil society organizations are doing to help end gender-based violence in conflict.

Bukeni spoke about WITNESS’ work training activists on how to document sexual violence through our guide on Interviewing Survivor’s of Gender-Based Violence and highlighted some of the benefits and challenges of working in the current technological landscape. He explained:

“Now everyone can be a documenter. The question thus becomes, how can we make sure that everyone is documenting in an ethical manner and using standards so that the documentation can be used by international justice or transitional justice mechanisms?”

While Bukeni commended the protocol for helping to improve documentation and ethical standards, he also challenged leaders to consider how we can work to ensure that sharing stories of gender-based violence brings about long-term change.

“What do we do with the stories that we hear? In the end, what do these women get from telling these stories? We need to make sure they bring about change and justice.”

Bukeni concluded his remarks with a call for governments, the UN, and civil society organizations to help strengthen ties amongst themselves and work together to end sexual violence in conflict by making sure that stories motivate substantial action on the part of those in power.

These speeches were echoed by short remarks by government representatives from the Democratic Republic of Congo, Finland, The United States, Croatia and Liberia on their commitment towards ending gender-based violence around the globe.

This event followed the Global Summit to End Sexual Violence in Conflict, hosted by the UK FCO and actress Angelina Jolie, which Bukeni also attended. WITNESS would like to thank the UK FCO and the United Nations for the opportunity to participate in this important conversation.